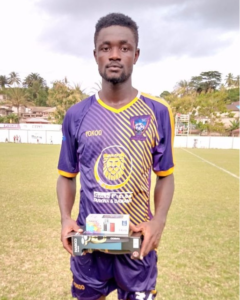 Medeama SC midfielder Prosper Boakye Owusu was adjudged Man of the Match following their 2-1 win over Accra Lions on match week 33 of the Ghana Premier League.

The young sensational midfielder dazzled in the heart of Medeama midfield in the team’s last home game of the season on Sunday.

Prosper, was drafted into the senior side from the youth team by coach Umar Rabi to fill the huge vacuum created after the exit of Justice Blay from Tarkwa to Asante Kotoko following the expiration of his contract and the subsequent injury of King Archerson which ruled him out of the rest of the second round of matches, has since been a consistent starter for the Mauve and Yellows and has never looked back.

The young player with a big heart for the elite competition of Ghana’s efforts was rewarded by being crowned the Most Valuable Player in front of our supporters at home at the Akoon Community Park, with his combative, dazzling dribbles, and incisive pass telepathic understanding with Jean Vital Origi against a very compact and classy Accra Lions midfield led by captain Nsobila.

The win lifts Medeama to 2nd on the league table with 56 points.